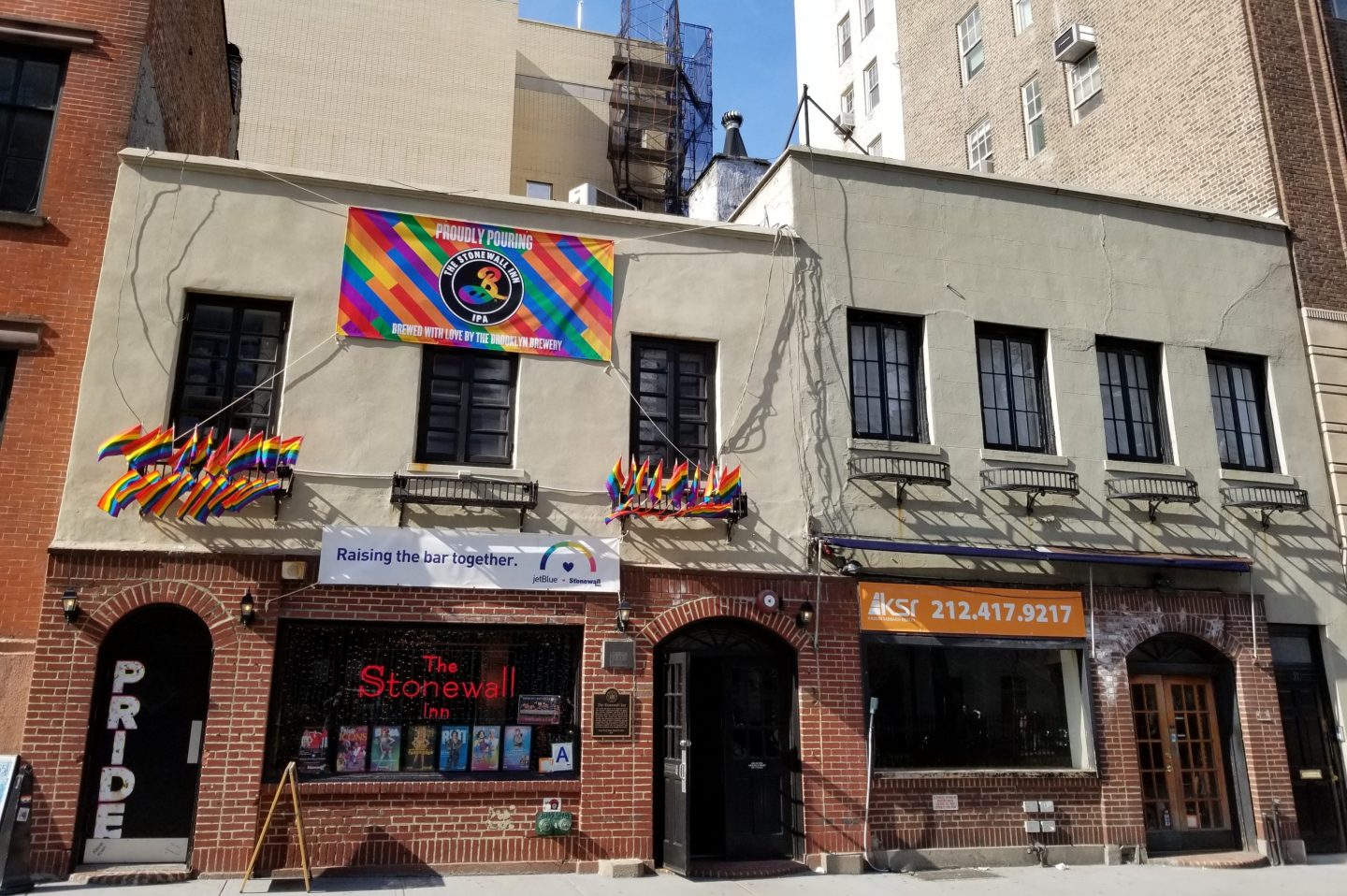 As the first LGBTQ+ visitor center within the National Park Service, the site will feature exhibits, events and art installations by LGBTQ+ artists.

With support from Google, the groundbreaking ceremony will be livestreamed on YouTube at 10:30AM ET on June 24.

NEW YORK, June 21, 2022 /PRNewswire/ — Pride Live, a social advocacy and community engagement organization for the LGBTQ+ community, today announced plans to open the Stonewall National Monument Visitor Center (SNMVC). Set to be the first LGBTQ+ visitor center within the National Park Service (NPS), a bureau of the U.S. Department of the Interior, the center marks a landmark achievement and leap forward in American history. The SNMVC is scheduled to open in the summer of 2024 and will occupy nearly 3,700 square feet at 51 Christopher Street, between Waverly Place and 7th Avenue South in New York City. With support from Google, the groundbreaking ceremony will be livestreamed at YouTube.com/c/pridelive at 10:30AM ET on June 24. For more information, visit www.stonewallvisitorcenter.org

“The opening of the Stonewall National Monument Visitor Center is a remarkable moment in the history of Stonewall,” said Ann Marie Gothard, President of the Pride Live Board of Directors. “We honor all those who came before us, most especially the queer people fighting for equality at the Stonewall Rebellion. The designation as a National Monument and the opening of this visitor center will memorialize their important legacy in the gay rights movement, and we hope will inspire future generations to continue fighting for LGBTQ+ equality.”

With a mission to preserve, advance and celebrate the legacy of the Stonewall Rebellion and the Stonewall National Monument, the SNMVC will serve as a beacon for generations to come, providing the unique opportunity to visit the very site where history was made and where the fight for LGBTQ+ equality visibly shifted with new waves of activism. The SNMVC will offer an immersive experience welcoming all people to explore and experience LGBTQ+ history and culture through in-person and virtual tours, lecture series, exhibitions and visual arts displays. In addition, the SNMVC will serve as home base for the dedicated National Park Service Rangers, who are responsible for the preservation of the Stonewall National Monument.

“On this spot, an energized group of people created a movement for equality that continues to this day,” said National Park Service Director, Chuck Sams. “The visitor center and its exhibits will celebrate and acknowledge LGBTQ+ accomplishments and serve as a place where people can learn about and connect with the LGBTQ+ community’s ongoing struggle for civil liberties.”

“The new Stonewall National Monument Visitor Center will serve as an important memorial for the Stonewall Uprising, an iconic and pivotal moment in the essential effort to fully realize America’s founding ideal that we are all created equal,” said U.S. Senator Chuck Schumer. “I’m proud New York will be home to the first LGBTQ+ visitor center within the National Park Service, honoring the LGBTQ+ community and their history. As a proud parent of a LGBTQ+ person, I won’t stop fighting against the unprecedented and unjust discrimination the LGBTQ+ community continues to face today.”

“Pride means more than parades and rainbow merchandise. It’s about showing the world that we exist, that we matter, and celebrating the people who fought and sacrificed to get us here,” said Senator Brad Hoylman. “The Stonewall Inn – the birthplace of the modern LGBTQ+ liberation movement – not only honors our queer forebears, but also plants a flag for the vibrant LGBTQ+ community thriving in our city today. The new Stonewall National Visitors Center will forever stand as a space to congregate, celebrate, and flourish. I am grateful for the efforts of President Biden and Congressman Nadler for helping to create this truly remarkable and inspiring moment in our community’s history.”

“It’s vital to create safe and inclusive spaces for the LGBTQ community, and we are proud to support the opening of the Stonewall National Monument Visitor Center, a space that will memorialize the legacy of Stonewall,” said William Floyd, Senior Director of Public Policy at Google. “This groundbreaking is a significant moment in LGBTQ history, and we are thrilled to share this remarkable occasion with a global audience through our YouTube livestream.”

The journey in recognizing LGBTQ+ history as American history was aided by entrepreneur, philanthropist and LGBTQ+ activist Tim Gill. In 2014, the Gill Foundation recognized a glaring omission of historic LGBTQ sites in the nation’s official records, and the organization made a grant to the National Park Service to commission a first-of-its-kind LGBTQ Theme Study, published in 2016. A separate advocacy campaign to designate the Stonewall National Monument was spearheaded by the National Parks Conservation Association, which worked with elected officials, NPS, historians and community stakeholders, culminating in 2016.

Diversified Production Services is managing the production of the groundbreaking ceremony and live stream with support from iHeartMedia. Fremont Blue Events is leading the management of the ceremony, with The Social Edge and Christopher Street Tours overseeing the launch of the SNMVC’s social platforms.

Additionally, TransTech Social Enterprises curated a collective of trans artists, one of whom was selected to design the inaugural and historic SNMVC membership card. The winner was Ang R. Bennett, who is an artist, curator, model, and trans and non-binary queer activist. Their painting will be revealed at the groundbreaking ceremony.

Brooklyn-based Lia Clay Miller, a world-renowned portrait and fashion photographer, will document every aspect of the development of the SNMVC, beginning at the groundbreaking ceremony, to the design and construction phase, and culminating with the grand-opening.

“The Stonewall National Monument provides the LGBTQ+ community with a physical representation of the struggle for justice and equal treatment under the law and in our society,” said Assemblymember Deborah J. Glick. “This place allows for interpretation of the long path that our community has been on and is a way to teach all Americans about who we are. I was proud to be part of the effort to create this monument and am elated to see the groundbreaking of the Stonewall National Monument Visitor Center, which will truly make LGBTQ+ history a part of what draws people to New York City and give weight to our historical record.”

“I was proud to champion the effort to designate the first-ever national monument to LGBTQ+ history at the historic site of the Stonewall Uprising in New York City,” said Congressman Jerrold Nadler. “The opening of the Stonewall National Monument Visitor Center will allow Americans to learn about these critical events in our history. Now more than ever, it is essential that we recognize the events at Stonewall that launched the modern LGBTQ+ civil rights movement here and worldwide. Since President Obama designated the monument, millions of Americans have had the chance to learn about these historic events. This new visitor center will honor the legacy of the brave members of the LGBTQ+ community who fought for their civil rights and support those who continue the fight for full equality today.”

The Stonewall National Monument Visitor Center will be funded by donations from the community and allies. To support this historic effort, please visit www.stonewallvisitorcenter.org or text REBEL to 243725.

ABOUT PRIDE LIVEFounded in 2012, Pride Live is a 501(c)3 organization dedicated to accelerating awareness and support for the LGBTQ+ community via social advocacy and community engagement to advance the fight for full equality. From working with the most marginalized and underrepresented organizations, to supporting the effort leading up to the declaration of Stonewall National Monument, and to conceptualizing and developing Stonewall Day, a benefit concert to elevate and boost awareness of the Stonewall rebellion and LGBTQ+ activism – Pride Live works in service of the LGBTQ+ community. To learn more about Pride Live visit www.pridelive.org.